The holiday break is always productive for me, and this year was no exception:

So far I’m quite pleased with how things are going. The whole kernel-based system has really helped, and coupled with the entity system approach I’m finding it easier to add the basic game functionality. It’s still tricky to add some of the more complex stuff, such as shops and cut-scenes, but overall it’s starting to look a little more like a game each time I work on it.

I’m afraid it’s another boring update. The last few weeks have brought some good progress, and it’s starting to feel like the seed of a game is in there somewhere. There’s still a very long way to go, but each week brings a little more functionality. Recent changes to the engine include:

That’s it for now. I promise the next update will have something to look at!

A nice short worklog entry today. Here’s a picture from the latest build. 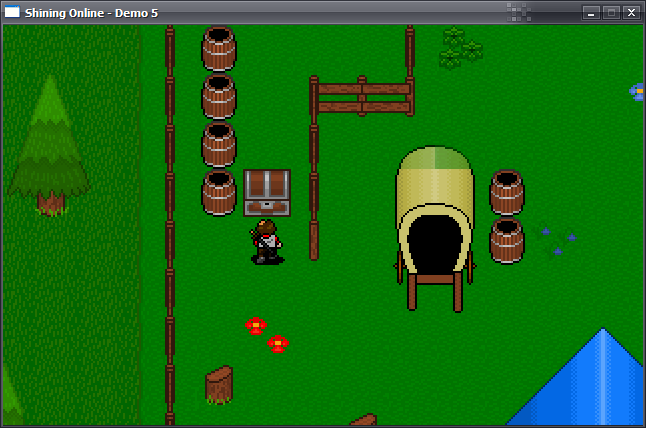 Nothing exciting from a graphical point of view. It’s exciting for me though, because this is the first time everything has been loaded from disk and not hard-coded. All the graphics come from the resource manager and everything is rendered using the new (stupidly overcomplicated) render pipeline. The entities (Cody and the chest) are built from templates loaded off disk, which is defined in the story file.

It’s the small victories that matter :)

So it’s been a little while since the last Shining Online development diary. As usual, there’s been no activity for a long time, but recently things have picked up so it seemed like a good idea to make an update whilst I’m in the mood.

Engine-wise things are shaping up nicely. As I’ve mentioned in the Shining Online update thread, the engine data is extremely flexible right now. Weapons, armour and items are all loaded from template files rather than being hard-coded. Since then, things have been updated so all resources (graphics, sounds, maps etc) are all loaded from resource files as well.

This has added some overhead (and probably explains why things have been so slow), but it’s made modifying the game much easier. Adding a new weapon is now a matter of updating the weapons file and adding a sprite resource. All of this fits in nicely with the new kernel-based game loop, so resources and content can be loaded during gameplay, either when a file changes or manually through the debug console.

Along with the new resource and content setup, there’s also a new render pipeline and entity management system.

The rendering system isn’t particularly complex, but it handles stuff like rendering tilemaps and sprite animations. And yes, animations are handled by the resource system so they can be tweaked in realtime :)

The entity system is a topic for another day. Right now it’s still a little early, so the details haven’t been nailed down, but there’s already support for player movement as well as NPC’s. The NPC’s don’t do anything yet, but with a bit of luck they’ll be walking around soon.

The game isn’t the only thing that’s been receiving attention lately – the website will be getting an overhaul as well. The design probably won’t change (I still suck at that), but the backend is being re-written to handle the online features and tie everything together.

Back in the Saddle

It’s been a while since the last dev diary, and it’s a bit of a mixed bag. Lots of things have changed, but there’s not really much to show. At the moment I’m writing a pretty hefty set of articles on the technical side of the game. There’s a lot of notes to go through so I’m not really sure when it will be ready, but it seemed like a waste to do so much work behind the scenes without sharing it.

The biggest change was the switch to a kernel based engine. It’s added a bit of overhead, and it’s probably over-engineering things, but it makes adding new functionality to the main loop a lot easier. Services can be added and removed dynamically, and can either be called every loop (like the screen renderer) or just sit in the background (like the resource database).

Once example of how useful this can be is with the debug listener. A DebugListener service object can be created and added, and it watches for changes to certain directories. Once a change is detected, it send an event so the resource manager can reload things. Because it’s added dynamically, it can be left out of non-debug releases, or even added via the debug console during runtime.