It’s been a while since my last worklog entry. I’m currently working on improving the scripting system so that it can handle more complex stuff like cutscenes and actual interaction. It’s a bit tough and is taking longer than I’d like, but that’s how these things go. I was originally using a simple trigger/action system, but it didn’t really support some of the more complex things I needed. I have a habit of getting distracted I guess.

I also spent far too long rebuilding the entity system to separate the graphical representation (the actual sprite image) from the logical position (co-ordinates on the map). The main reason was so the server doesn’t need image libraries in order to run. Plus it doesn’t really need to know the actual image details, just the position of the character. I probably wasted a week getting it all switched, but I think it’s better to do it now than later.

Another thing I’ve been working on is getting the various menus up and running: 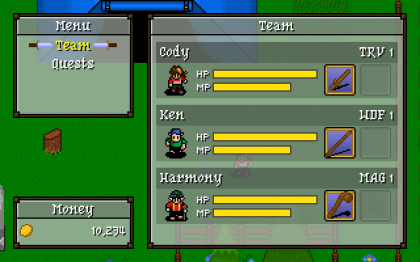 This is my first effort at the status screen. It’s a little different from the usual Shining Force style, but I think it works. There’s still some changes I’d like to make (such as the health bars), but overall I’m pretty happy with the layout.