Let’s get straight to the fun stuff, shall we?

Below is a very early screen grab of the latest tileset. It’s nothing particularly fancy, but hopefully fits with the Shining Force 2 style.

There are still a lot more transition tiles to do, as well as animating the water and adding little touches to make it more interesting, but it’s getting there. 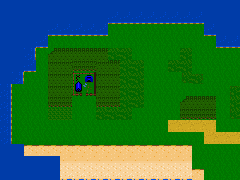 There are two other maps in the works, but this one is the most colourful and complete at the moment.

Yeah, now it’s time for more boring screenshots, but this time of some development tools and engine features.

First up we have a really simple directory listener. It runs in the background and watches a directory for changes. When there’s a change, it broadcasts it to any listening client. Why is this useful?

With a little bit of tweaking, the engine can listen for these messages and then reload resources that have changed on the fly. This makes it much easier to see how tilesets, maps and animations look without having to restart the game. 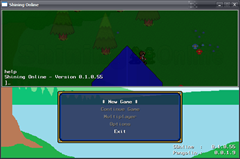 Next, we have the built in console. If you’ve played Doom, Quake or similar, you’ll know what this is for. Again, it’s about making it easier to see changes without having to restart or recompile.

So far the console is only really useful for listening for debug messages, but in the future there will be commands for checking what objects are currently active, what’s in the database and more.

As with most things, there’s some effort up front, but in the long run it should pay off.